Create an Account - Increase your productivity, customize your experience, and engage in information you care about.

It kills ash trees (Fraxinus spp) by eating the tissues under the bark.

This metallic green beetle is native to East Asia.

It was brought to the United States accidentally, in the wood of shipping crates from China. 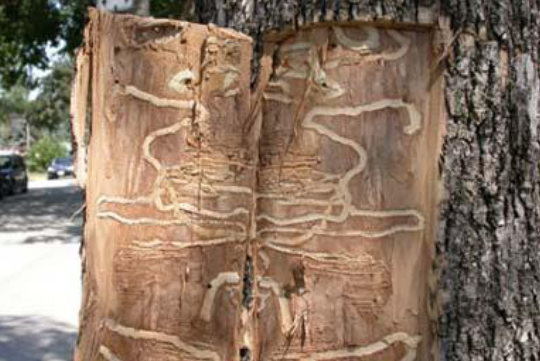 The EAB larva (the immature stage of EAB) spends its life inside ash trees, feeding on the inner bark where we cannot see it. This feeding disrupts the trees' ability to move water and nutrients back and forth from the roots to the rest of the tree. The tree starves and eventually dies.
A tree that has been attacked by EAB can die within 2-4 years. It is estimated that 100’s of millions of ash are dead or dying in the Midwest because of this insect.

Wisconsin forests contain more than 770 million ash trees, nearly 7 percent of the tree population. In urban areas, we estimate that, on average, 20 percent of trees are ash.

On its own, the beetle will only fly a few miles. However, it is easily and quickly moved to new areas when people accidentally move emerald ash borer larvae inside of infested firewood, ash nursery stock, and other ash items.

EAB and the City of Ashland

EAB has not yet been documented in Ashland but EAB has been found in the nearby Cities of Superior and Duluth.

The City of Ashland has approximately 700 ash trees located in public right of ways and open park areas. There are hundreds or perhaps thousands more ash trees within the City limits on private property and in forested areas.

Since the discovery of EAB in the Midwest the City has discontinued planting ash trees and has diversified species selection for planting. Diversification of tree species when planting will help to reduce the impact of future outbreaks of insect infestation or disease that targets a specific tree species.

When discovered, EAB Infected trees will have to be removed or chemically treated with insecticide to attempt to save the tree.  The City is expected to implement a combination of removal and treatment of the public ash trees. Property owners will also have to make the decision to treat or remove infected ash trees on private property. Future updates will be provided by the City regarding ash tree removal, wood disposal, and wood utilization options.

Additional EAB information is available in the following web page and documents.